I really enjoyed this comic book. Before I get into it, let me just say by the way that, as a cartoonist, I appreciate Neufeld’s dedication to drawing gorgeous and detailed backgrounds. There’s no cheating in this book, from an artistic 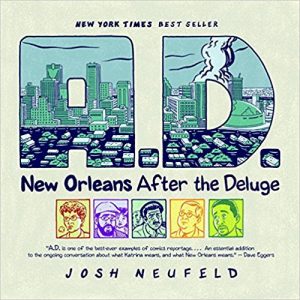 This is all the more impressive given that the book is really a piece of reporting. It’s not attempting to be literary or exactly beautiful. Rather, it’s a pretty high fidelity retelling of the stories related by seven people of different backgrounds who survived Hurricane Katrina.

That said, it’s not without great moments. For instance, there’s a part where the characters trapped in New Orleans find that the only people maintaining order and keeping thirsty people alive are the “thugs” who are willing to rob local stores to supply water. The almost science fictional seeming militarization of the city is also very striking. One scene describes a man in a boat coming to a hospital to ask for help for his baby. He is turned away by guards with guns, although people on the upper floors of the hospital throw food and water to him before he goes on his way.

I usually have a gripe about memoirs that present bare facts rather than trying to make sense of it all, but A.D. is really more of a report than a memoir, and on those terms it succeeds fabulously.